Originally released in 1979, "American Nitro" debuted at the Deauville American Film Festival in France, and at Filmex in Los Angeles. Subsequently, it was distributed theatrically through out the United States and most of the world. 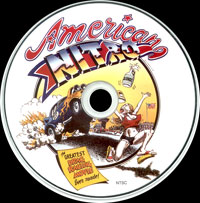 Having by now reached almost cult status, as the film that defined the 1970's drag racing scene, "Nitro" is back and set to enshrine the lost world of Theatrical Drag Racing as a fossil-fueled social statement.

Sop up vivid coverage of 70's drag racing, as "Nitro" returns to settle some scores. Relive Jungle Jim's half track burn-outs and 50 mph back-ups. Watch Jungle Pam, in an outrageous outfit, guide Jungle back into the bleach, again and again.

When you combine wild motorcycle jumps, jet cars blowing down fences, wheel standing Army tanks, tons of the top funny cars and fuel dragsters, plus a Crash and Burn Sequence that an overwrought Kevin Thomas of the Los Angeles Times described as,"morbid overkill, you have a movie that is flat out guaranteed to evoke the classic and unruly world of head-on drag racing, for all time.

With "Nitro's" cameras back inside the funny cars as they burn down the strip, let the memories flood back as old time, full throated dragsters are heard again.