Beginning after World War II, on the deserts outside of Los Angeles, this loosely defined sport was mothered, much like Rock’n Roll, by a newly emerging group of juveniles who, for the first time, had their own money, their own cars, and time on their hands. 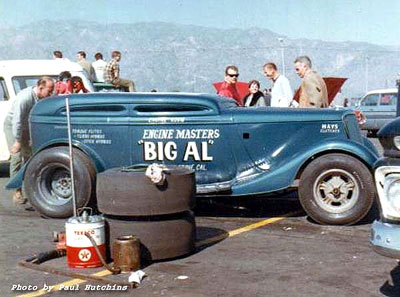 Although their leaders sought to establish a respectable sport, the spectators came for a show. "American Nitro", is a movie about one of these shows that took place every few months at Fremont, a small but famous drag strip in Northern California.

With only the war whoops of their radio commercials and the roar of their muscle cars to speak for them, these racers merited little attention by a modern society whose pretenses at sophistication shut out life as it is, for the Authorized Version.

The realities of this gaudy, sideshow, automobile act, had no place on network television. But while the computer editing consoles at ABC’s Wide World of Sports gave the electronic hook to this 20’ Th century survivor of a 1900’s amusement business, "American Nitro", takes it on full bore, with a gusto that has been best described as, "Asphalt Anthropology".