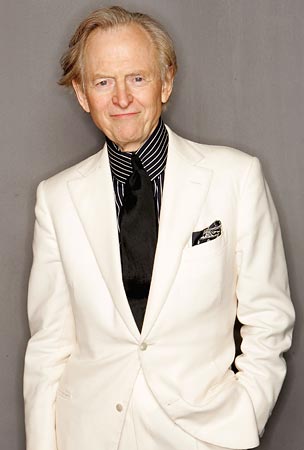 In 1965 the author Tom Wolfe published his first book, which was a collection of essays. One of the essays, originally published in Esquire Magazine in 1963, commented on L.A. car culture and was titled, "The Kandy-Kolored Tangerine-Flake Streamline Baby". This article is noted for having changed American writing, introducing what was called, "the new journalism".

What Wolfe wrote was in response to what he saw...

"The educated classes in this country, as in every country, the people who grow up to control visual and printed communication media, are all plugged into what is, when one gets down to it, an ancient, aristocratic aesthetic. Stock-car racing, custom cars--and, for that matter, the Jerk, the Monkey, rock music---still seem beneath serious consideration, still the preserve of ratty people with ratty hair and dermatitis and corroded thoracic boxes and so forth. Yet all these rancid people are creating new styles all the time and changing the life of the whole country in ways that nobody even seems to bother to record, much less analyze."

Well, I did record it in a movie called "American Nitro" and that is what this web site is about; the outer reaches of American car culture and what it says about us as a people.

I was just getting out of high school in a small town in Northern California when Wolfe's book came out. "Nitro" came about as my response to the car culture I was exposed to in the small valley town Boonville, California. Instead of "American Graffiti" I made "American Nitro".

I had always wanted to do something with images on a screen with voice over. That turned out to be my first film called, "Jeffries-Johnson 1910" which was about the first black boxing champion of the world Jack Johnson. When it came time to make something else, I wanted to do the complete opposite from a black and white movie that was made from still photographs. This new subject had color and lots of movement. It was also contemporary and allowed me to comment on my high school exposure to hot rods.

After college I worked in a post production company in San Francisco. Here we worked on documentaries and industrials mostly, but they were capable of doing any services pertaining to motion pictures. I worked in the sound recording department and then in film editing. So, I knew how to make a movie. But I didn't want to make a movie like the traditional documentary. I shot and edited "Nitro" to reflect what I hoped was a new style of movie. A movie that could combine a social commentary with the appeal of an exploitation film.

I think I should define the much maligned term ,"exploitation film". It simply means a film genre that, without large budgets or name actors, can draw an audience. Michael Moore's film, "Fahrenheit 9/11" is an exploitation film.

I had seen art films at special midnight screenings in regular theaters. But nothing was really like what I wanted to make. At one extreme, there was, "Scorpio Rising" by Kenneth Anger and at the other was, "Mud Honey" by Russ Meyer. One was a pretentious art film and the other was soft core exploitation with humor.

Also, I had seen the ski films of Warren Miller and some of the nature films like, "Alaskan Wilderness Adventure". These were carted around to movie houses and shown by the film maker in a theater rental arrangement called, "Four Walling". They paid the theater owner a flat rental for the space and sold their own tickets with their own advertising. All of this stirred around in my mind as a possible way to go in making a movie. 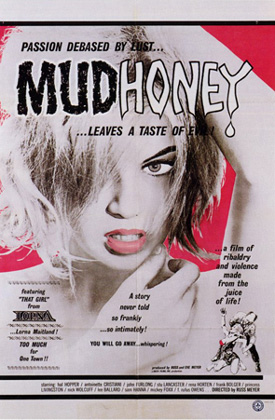 My brother and I purchased a 16mm camera and sound recorder and I learned how to use them. It was a quiet running Eclair camera that I could shoot sync-sound with when accompanied by a Nagra tape recorder. It was also shoulder mounted so, with a hired sound man, I could go almost anywhere and still record decent quality images and audio.

What started as a little documentary grew to be a film that had theatrical distribution potential. I set up some screenings where I worked and invited some local sub-distributors. These people handled the local theatrical bookings for larger national companies. Two or three sub-distributors were interested in, "Nitro" and they in turn brought a national distributor and a fairly large theater chain to see the film.

Sensing the chance at an even better deal we took the picture to Hollywood and did more screenings. The end result was a deal with Cannon Releasing which was about to go big time after it's purchase by the distribution team of Golan and Globus. They paid for a blow-up to 35mm and set-up a national distribution plan. Our idea was to go with a company that had a pipeline that would get the film out in a big way. 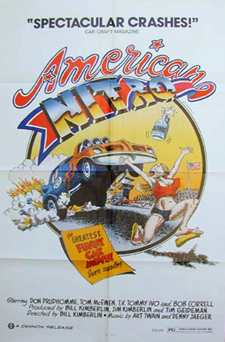 In fact, we were successful in that, especially if you look at the grosses of the other theatrically released documentaries. Up until very recent times, in other words, before the Michael Moore type of political release, almost all of the more famous documentaries never grossed more than about $70,000. "Nitro", in 1979, grossed way over a million dollars. So, we really got it out there into the mainstream.

Of course, the film was hardly ever reviewed perceptively. It was a drive-in picture and almost everyone saw it as just a drag race documentary. Which it was. But, if you thought about it for a minute...who in the hell would make a drag race documentary like this? It didn't hype it’s subject, it exposed it as a strange and somewhat hidden subculture; an outlaw sport which neither drag race officialdom nor the reviewers much appreciated. There were a few people who got it. On the high end, it was seen as, "asphalt anthropology" and on the low, "I watched it every night for a year, just ask my wife."

When we made the film it was the time of pioneering, in the independent exploitation film. A few hearty souls were out there trying to make and get distribution for a movie that they had made themselves. Ours was not a film festival discovery. The festivals came after the distribution deal was already made. So it really was, "do it yourself".

Ironically, the movie traced the same tricky trail that small time drag racers traveled. In those early days a guy with a fast car and some talent could go on the road, win a few races, and make a name for himself. It was the same with film making. The odds were long, but if you could get your movie made, you had a shot.

I got my shot and by 1982 I was working for George Lucas on the biggest movies in the world. If I have any regrets it is that I did not stay in directing, trying to perfect my skills.